Should Everton Change Formations? A Breakdown of the 4-2-2-2

What’s the Philosophy Behind This Formation?

A 4-2-2-2 formation focuses on exploiting the spaces between the opposition’s attack and defense while maintaining a solid shape. The objective is to have ideally 6 players during any period of play either in attack or defense.

Having two defensive midfielders sit back and protect the back four is important for this formation. It allows the wing-backs to push forward and build-up play along the perimeters of the pitch and the midfielders further up the pitch to cut inside and link up with the strikers.

This creates 6 players in attacking position, 2 on the wings and 4 in the center of the pitch. A weakness of this formation is that the wings are left vulnerable for the opposition to exploit.

This is a very fluid system that can go from a 4-2-4 while attacking or a 4-4-2 in defense. Let’s break down the player roles/responsibilities for each position.

The wing-backs have a tall order to fulfill in this formation. They are essentially box-to-box midfielders on the edges of the pitch. They must push forward often and overlap the attacking midfielders up the pitch in the space created for them. At the same time, the must be aware of any movements behind them in order to trackback. A wing-back must be good at crossing and have fantastic stamina to be a great fit for this formation.

The Defensive midfielders are the most key components for the 4-2-2-2 formation to work effectively. You need to have 2 defensive-minded midfielders that can sit back in front of the backline. Their main responsibility is to help cover on defense while the wing-backs push up the pitch. It’s crucial for the defensive midfielders to have a strong passing ability, particularly the long ball in this situation.

Attacking midfielders in the 4-2-2-2 have much for freedom compared to the other positions. The attacking midfielders have the choice to either stay out of the wings or cut inside while attacking. Having great technical skills like dribbling and passing is extremely important for this formation.

However, the AM’s must be aware while in transition as they have to help trackback on defense if the wing-backs are too far up the pitch. This can lead to vulnerability on the counter-attack.

With 2 strikers up top, you can mix and match what strengths to play with. The perfect combination would be to have one target man playing alongside a poacher-type of a striker. The target man will have to option to come into the midfield more to link-up play. This will create problems for the opposition’s defense.

As we stated before, the 4-2-2-2 formation is a very fluid formation. Everton are in a strong position as many squad players can perform in multiple positions. Let’s break down a possible Everton lineup with this formation. 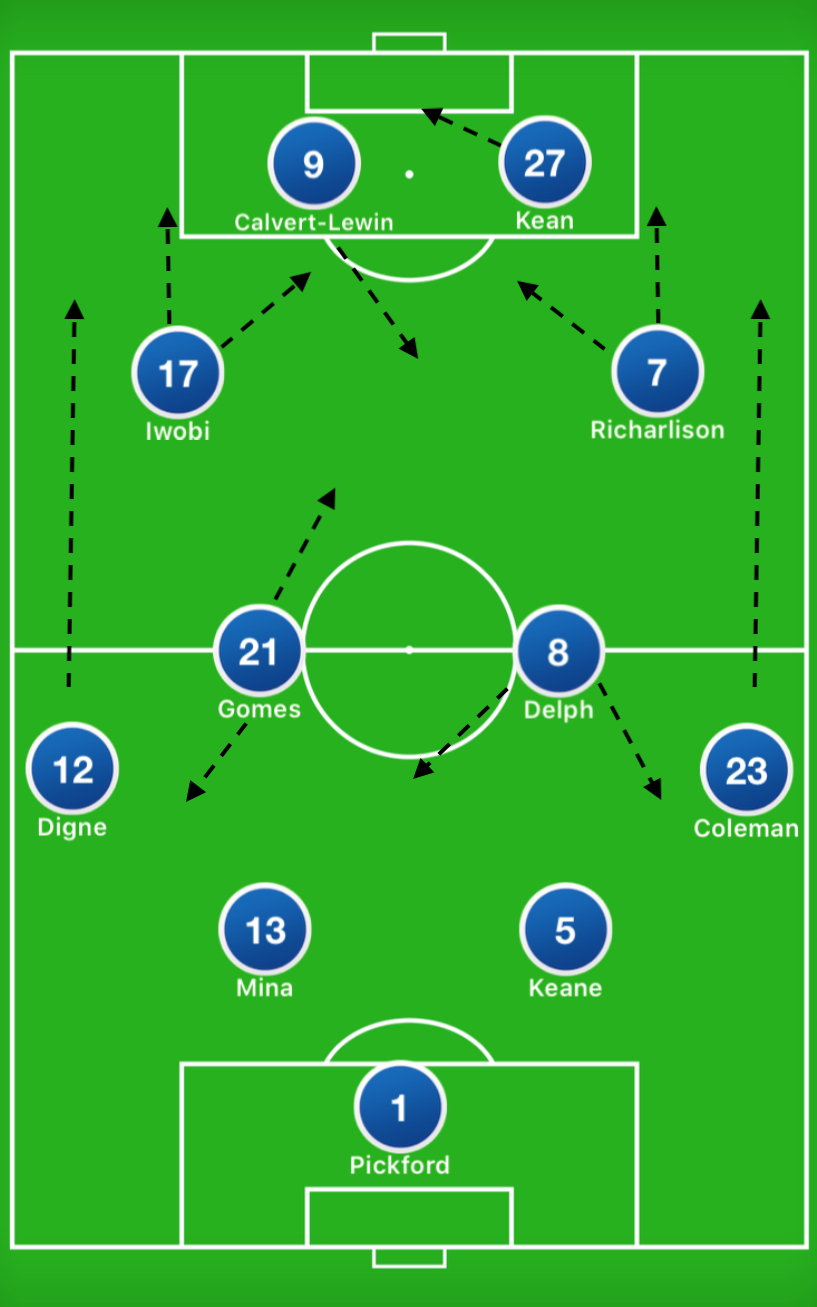 Everton has been blessed over the pasted 5+ years with Baines and Coleman manning down the wings. As time has caught up the Baines, Everton replaced him with Lucas Digne. Digne and Coleman are great fits for this system.

Both wing-backs have high stamina that helps them remain in the match for all 90 minutes. But what both players are great at is attacking up the pitch. Coleman loves to be involved in the build-up play on the right side providing quick one-twos with the midfielder or kicking over a semi-decent cross.

Since Digne came over from Barcelona, he has brought with him some attacking flair that reminds Evertonians of Baines in his prime. Digne pushes far up the pitch and whips in exquisite crosses for the strikers.

In the 4-2-2-2, Coleman and Digne must attack further up the pitch than in any other formation. Their goal is to target the pockets of space that the midfielders have created of them. They must be aware of their positioning however in case of the defense slipping in behind them.

Everton do lack a bit of depth in this position, however. If either Digne or Coleman are out with a long-term injury, this formation might not work. Baines is the back-up left-back at the moment, but we aren’t sure how much he has left in the tank. Djibril Sidibe was brought in on loan from Monaco to provide some cover for Coleman. Sidibe does have some knee problems in the past so it would be difficult for Everton to put too much pressure of the France international.

At the moment, André Gomes and Fabian Delph are penciled in as the two midfielders Everton should use in this formation. While both players are technically not defensive midfielders, they both provide excellent value in the 4-2-2-2. Gomes and Delph are more box-to-box midfielders that can help link up the defense with the attack.

Gomes would be the key player to push Everton further up the pitch as we would have more freedom. This suits Gomes as he is capable of providing quality passes with a bit of creativity.   Delph’s job would be to sit back a bit more and protect the back four. Fabian would also protect Gomes in case he is too far up the pitch and the opposition slips in behind.

Everton could alter the way they play in the defensive midfield position if they start Morgan Schneiderlin or Gbamin. Gylfi Sigurdsson could possibly start in this position as well alongside a more defensive-minded player like Schneiderlin.

This is where Marco Silva might have a headache selecting players for these two positions. We have Iwobi and Richarlion penciled in for this formation at the moment and here’s why. Iwobi and Richarlison both play an adequate winger position, but both are far more dangerous in the middle of the pitch and closer to the goal. This is why the 4-2-2-2 works perfectly for Everton.

Like we stated in the section about duties for the wingers/attacking midfielders, they must have great technical skills. Alex Iwobi is a brilliant signing for Everton. He is pacy with excellent footwork that will give the defense nightmares. Iwobi is also a creative player and in the 4-2-2-2 he will have the flexibility to either overlap with Digne on the wing or can cut inside and drive towards the goal.

Richarlison is a similar player as well. He isn’t as effective out of the wing as Iwobi but he does work well with Coleman. Richarlison will more likely cut inside in this formation as it suits him much better. He is more dangerous when he is in the box, it’s that simple.

Bernard and Theo Walcott will provide great depth in this position as well. Overall, all four options on the wings for Everton sit this system perfect as all are well in attack and have the mindfulness to come back and help on defense.

And last but not least, the strikers. Everton has Dominic Calvert-Lewin, Moise Kean and Cenk Tosun as their current options. These aren’t terrible options either. While some Evertonians aren’t that high on DCL as others, this formation is almost built for him. Calvert-Lewin is not a sole striker leading the line. He needs a partner to bring out the best in his ability. We placed Moise Kean alongside of him here.

Dominic Calvert-Lewin is a strong, young player. He is a great target man that can press the opposition’s defense and link up well with the midfielders. In the 4-2-2-2 Calvert-Lewin can come back into the midfield a bit more and create a focal point for this Everton attack. His job would then be to connect with either the wingers or Moise Kean in the final third. Unless DCL can refine his finishing, I see him more as a striker that will get 10 goals + 10 assists per campaign. That’s really good!

Mosie Kean, on the other hand, is a promising, youngster that Everton signed from Juventus. One day he could lead a line by himself. But at this moment, I believe DCL and Kean complement each other. Kean has a knack for finishing. He is going to be scoring the goals of the Toffees for the next few seasons to come. If Kean and DCL can create an understanding between the two, watch out!

But what about Gylfi Sigurdsson?

Gylfi can be the jack of all trades in this formation. While we didn’t include him in the formation above, but he can play across all positions. Everton could iterially place him in the second striker position, out of the wings or even in the defensive midfielder spot.

To wrap this up, Everton are a predictable team. They slowly build up from the back and work through either Digne or Coleman. Everton cannot break teams down that sit back and wait. The 4-2-3-1 is a great formation, a solid foundation. But Everton must take it up a notch and switching to a 4-2-2-2 will help break down some of these teams that sit against us and wait it out.

Let us know your thoughts on the 4-2-2-2. Should Everton switch to this or is there another formation that suits them better? Let us know in the comments below.

As always, make sure you follow us on Twitter @ToffeeTargets for more up to date Everton transfer news.