What You Need to Know about Dental Malpractice and Tail Coverage 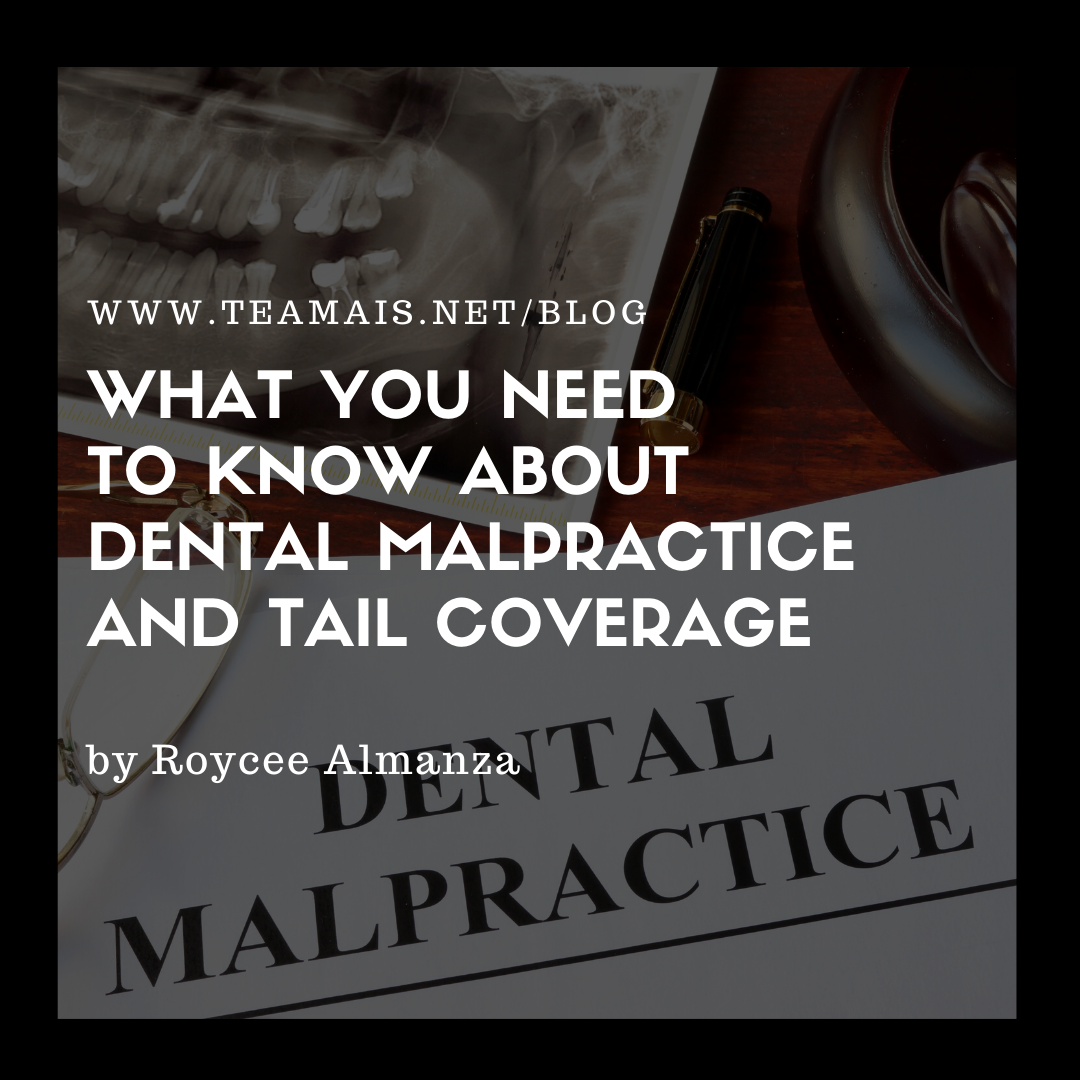 What is dental malpractice?

As with any other profession, there are certain accepted standards when it comes to patient care. Dental malpractice happens when these standards are not met and a dental professional’s negligence causes harm or death to a patient.

Let’s talk about a more concrete example. Patrick goes to his dentist because of a toothache that has been bothering him despite him taking pain relievers. When Dr. Smith explains to Patrick that the tooth needs to be extracted, Patrick agrees without any question because he trusts his dentist’s judgment and recommendation. After a successful procedure, Dr. Smith prescribes medicine to Patrick for the pain and to avoid infection. But a few minutes after Patrick takes the medicine, he starts to have difficulty breathing and turns out to be allergic to the prescribed medicine. What’s wrong in this scenario? It is actually standard practice for a health professional to confirm if a patient is allergic to anything prior to prescribing any medication. It is part of due diligence that they ask questions to find out if any procedure or medication might pose potential health issues for their patients. For instance, if they are going to inject the patient with a drug that causes an increase in heart rate, then one would expect the health professional to ask if the patient is hypertensive or is under any medication for hypertension.

But what if Dr. Smith did ask the relevant questions but Patrick wasn’t aware of any allergies? Obviously, whatever happens to Patrick isn’t going to be Dr. Smith’s fault. But it doesn’t mean Patrick cannot decide to file a malpractice lawsuit against Dr. Smith anyway.

Now, the question is, as a dental health practitioner, how does one get protection for potential costs brought about by a dental malpractice claim?

A dental malpractice insurance coverage helps protect a dental health practitioner from the potential costs of a dental malpractice claim, whether the accusation is legitimate or not. This protection covers not just physical harm but also emotional stress and property damage.

Here is a list of the more common reasons for patients to file a malpractice lawsuit against a dental health professional:

Now that it is quite clear how a dental health professional would benefit from a dental malpractice coverage, let us talk about a couple of other scenarios. What if your coverage ends tomorrow and there are times when claims would come a few weeks or even months after a procedure or treatment is done? Or what if you decide to change your insurance provider and are expecting to not have coverage for a couple of weeks?

There are two basic types of malpractice insurance — ‘claims-made’ and ‘occurrence’. Let’s start with the latter. Occurrence policies will cover claims for incidents that happen while the policies are in effect regardless of whether a claim is made while a policy is in place or whether it has lapsed. The important detail here is that the incident or malpractice happens while the occurrence policy is in place. In short, if I have an occurrence policy that took effect a year ago today and had just lapsed yesterday, any claim today or sometime in the future for a malpractice incident that happened two months ago (while the policy was still in effect) would be covered by that policy.

On the other hand, claims-made policies are a bit more complicated. For these policies to cover malpractice claims, the following should be true (and never one without the other):

Obviously, this question arises —  “What if the policy had already lapsed by the time the lawsuit is filed?”  We all know that there are circumstances where the aftermath of malpractice can only be seen months or even years after the incident in question.  This is where the “tail coverage” enters the picture. A dental health professional has the option to have his claims-made policy written so that the cover extends to a specific number of years after the policy lapses. In short, if Dr. Smith has a claims-made policy with a tail coverage of five years, he will be covered for an incident that results in a malpractice lawsuit filed within five years from the time the policy lapses.

Although having occurrence insurance would obviously be the better choice, it is important to note that claims-made insurance costs less even with a tail coverage purchased.

At the end of the day, the two most important things to consider before choosing between these two types of dental malpractice insurance are that your choice gives you peace of mind and paying for the policy doesn’t break the bank.