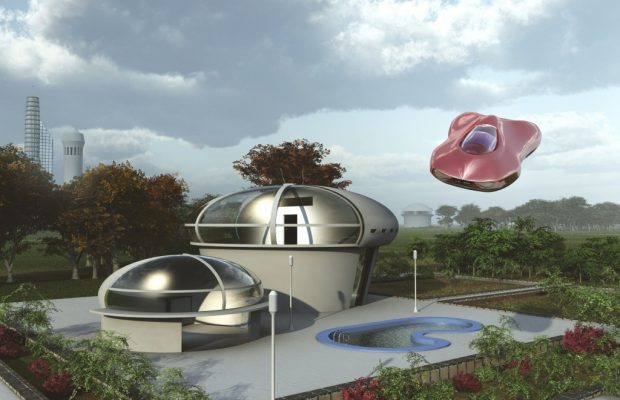 Ever wondered what your average home will be like in the future? Whilst there’s no way of knowing for sure how the human race will live in 50 or 100 years, new technological advancements and trends can give us a good idea of what may be around the corner. Here are just several predictions as to what homes may look like in several decades time.

Homes will be smaller – and rooms will be multi-functional

Space is becoming harder to come by, especially in and around cities. In order to support the rapidly growing population, we’ll have to reassess how much living space we actually need. Homes are likely to get smaller and a lot cosier and architects will find new ways of making the most of a little space.

Multi-functional rooms could be a way of making use of little space. Already people in cities have been experimenting with this idea such as this New York apartment that fits 8 rooms into 420 feet. By using in-built storage, convertible furniture and moving walls it could be possible to use the same space as a kitchen, living room and bedroom.

There will be more concrete

Sustainability of materials will also be a future concern. Whilst wood has been a reliable material for millennia and is one of the eco-friendlier options, there are still issues when it comes to deforestation.

Concrete may become the go-to option. The Global Cement and Concrete Association has been working on a sustainable form of concrete that would not only have minimal impact on the planet but would also be built to last (something which many modern homes aren’t built to do). A future of concrete buildings may not sound exciting, but it could be our best option.

Homes may even be made of fungus

A wilder concept is the possibility of building future homes out of a genetically modified fungus known as Mycoform. Building blocks would be literally grown; the result would be living, breathing homes that are environmentally friendly, sturdy and durable. The Terreform website has several other possible eco-friendly options including the in vitro meat habitat – which proposes the idea of using pig cells to produce homes made of genetically modified meat (the fungus homes probably have more promise).

There will be more floating homes

With a growing shortage of land, it’s possible that we may even end up building more homes out into the sea. Floating homes can be found in many places around the world and there are already plans to build entire new communities of floating homes. Innovative plans would have to be made to deal with sewerage and waste. Lakes and rivers could also be put to use in a similar way.

Homes will be more self-sufficient

Already there’s been a shift towards a more self-sufficient lifestyle when it comes to energy – solar panels are being built on many new homes, preventing the need to use as much mains electricity. Heating can also be run off of solar power.

Meanwhile there’s growing support for rainwater harvesting and purification. The likes of Harvest H20 have been developing rainwater harvesting techniques, allowing people to take their water supply off-grid. Unfortunately, many modern homes consume a lot of water – only areas that receive a large amount of rainwater may be able to rely on this water source in the future.

There could also be a growth in the amount of us growing our own food. Even if less of us have land to grow fruit and vegetables on, there are ways to grow plants indoors that may become popular in the future.

Everything will be connected to the internet

Smart technology is already taking off. This involves connecting everyday appliances to the internet so that they can be controlled remotely and monitored digitally.

Smart heating is a popular example that allows people control their heating from their phone. Smart security meanwhile is a also growing in popularity and can protect homes against burglaries by allowing cameras to be monitored from your phone, as well as being able to lock doors remotely and activate alarms. Other examples include smart lighting, smart electrical outlets, smart refrigerators, smart ovens, smart TVs and even smart kettles.

More people will have customised furniture

The way we furnish our homes may also change. 3D-printing has made it easier to create customised furniture on a mass-produced level and it is through to be the way of the future according to this Sculpteo article. This could give people more freedom to choose furniture that fits the style and dimensions of their home.

Home ownership is also thought to plummet in the future and more people will rent homes. As renovations won’t be possible, creating customised furniture could be a way making a home feel like it’s still your own.

Homes will learn and adapt to their residents

New materials and smart technology could also result in homes eventually adapting with their residents. There are already mattresses that can adapt and mould to the person lying on them. Meanwhile, there are smart heating systems can learn people’s habits, adjusting the heating automatically at certain times. Homes may eventually have AI that is able to pick up when you wake up, turning on the TV for you and even pouring you a morning a glass of coffee so that your morning routine is as smooth as possible.