What Is Shallow Water Blackout? 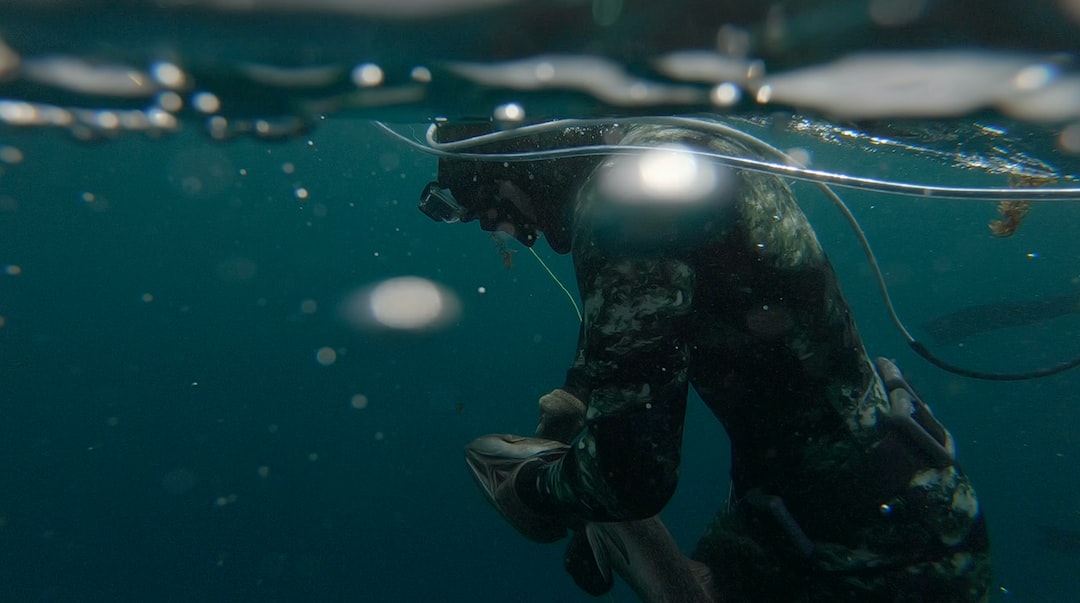 As rewarding as underwater recreation can be, there are many hazards and dangers to be aware of. Whether you’re a dedicated ‘spearo’, a keen snorkeller or you simply enjoy a good swim, your safety is paramount. This isn’t something that only applies to beginners. No matter how long you’ve been diving or how much experience you have, those dangers are as real to you as anyone. And one ‘silent killer’ that every diver, snorkeller, and spearfisher must take note of is shallow water blackout.

WHAT IS SHALLOW WATER BLACKOUT?

Our brains need oxygen, which is provided via the blood flowing around our bodies. If the oxygen supply is lowered or blocked for any reason, we suffer from cerebral hypoxia, which means ‘low oxygen in the brain’, and this can lead to unconsciousness. We are not usually aware of our breathing – our brains handle this for us. As we breathe out, our CO2 levels rise, which triggers a reaction that makes us breathe in again. When we hold our breath whilst swimming, CO2 levels begin to rise and oxygen levels will drop, and we feel the urge to inhale. Once the oxygen drops below a given level, the brain will basically shut down certain processes, resulting in a faint, or blackout.

Some people will experience a feeling of detachment or euphoria just before this happens, but they quickly slide into unconsciousness. This can happen at any time and without any warning, which is why it is so dangerous.

Thankfully, there are ways to prevent it or at least reduce the risk by being prepared and by avoiding certain behaviors. But first, it pays to be aware of all the facts and to learn about similar problems that are often referred to as ‘shallow water blackout’ (or hypoxic blackout) but which are separate hazards in their own right. 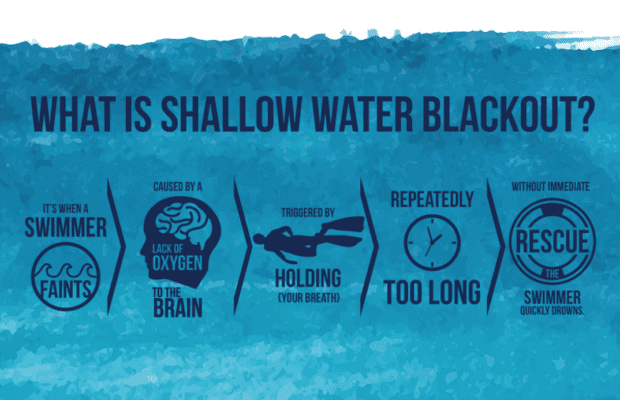 As mentioned above, this is down to low oxygen levels. But strictly speaking, this refers to the circumstances that occur towards the end of the dive or swim, where the breath has been held almost to the limit. This type of problem usually occurs in dives/swims that have taken place entirely in shallower waters (less then 15ft/5m) – hence the name. Confusingly, this term is frequently used in reference to other forms of blackout – even in information on websites run by veteran spearfishers and divers.

This occurs immediately following your dive, as you take recovery breaths at the surface. The danger period lasts for about a minute, in which time you are at risk of fainting should you not be able to draw adequate levels of oxygen. This is why it is essential to make sure that you take rest periods between each dive to ensure you recover fully.

The word ‘apnea’ means ‘without breath’, and is often associated with the breath suddenly stopping involuntarily during sleep. However, it can also refer to holding your breath voluntarily. This blackout can occur when you hold your breath for too long, perhaps when you’re on a deep dive, for example. It is important to know your breath-hold limit, as once you go beyond this you run the risk of static apnea blackout.

As the name implies, this happens at deeper levels beneath the water, when the diver has spent longer than they should at the deepest part of the dive – which in itself adds to the danger. As the diver (or spearfisher) begins their ascent to the surface the pressure around them is reduced, which can cause a drop in oxygen concentration within the lungs which in turn makes it harder for the blood to provide enough oxygen to keep the brain functioning properly, resulting in a blackout. It is potentially easier to rescue someone who is closer to the surface. The further down you are, the less likely your buddy (or others) will be able to rescue you.

These are a few of the terms used, but there are many others used to describe the same, or similar, problems. All of these are very real dangers that you should be aware of and prepare for. And this involves understanding the causes and exploring ways to prevent them from happening.

WHAT CAUSES THESE BLACKOUTS?

As we know, the common factor in all these hazards is a lack of oxygen within the brain. Holding your breath for extended periods, repeated breath-holds without adequate recovery time, and spending too long at deeper levels are contributing factors. It doesn’t matter how fit and healthy you are, or how long you’ve been diving. This hazard can affect anyone, although there is a definite tendency among male, novice swimmers/divers below the age of forty to be affected.

The key to understanding the problem lies in accepting the fact that it is the CO2 in your blood that triggers the reflex to inhale. This urge to breathe in is your warning sign, which is why it is vital to know your breath-hold limit and not to exceed it. On average, most people (without specialized training) can stay underwater for between 30 to 90 seconds.

There is a growing trend amongst certain circles in the diving/spearfishing community to use breathing techniques that involve intentional hyperventilation before entering the water. This tricks the brain into believing that there is more oxygen in the blood, and therefore less CO2 (a state known as hypocapnia or hypocarbia). While this technique may work for some people, it is highly dangerous. As the brain figures that CO2 levels are low, the inhalation reflex is suppressed for a longer period. Your dive may be longer – but at what risk? Many cases of blackout (of any type) have been caused by this practice, frequently resulting in death due to drowning.

In cases of shallow water blackout, brain damage and death can occur in as little as 2.5 minutes, whereas in normal cases of drowning the generally accepted time is between 6 and 8 minutes. This is because the brain has already been starved of oxygen during the dive/swim.

WHAT CAN CONTRIBUTE TO BLACKOUTS HAPPENING?

As stated previously. forced hyperventilation is often a contributing factor. Most veteran spearfishers and freedivers will advise against it. Aside from this, entering the water when you are fatigued, dehydrated or hungry carries the risk of increasing your chances of a blackout. All of these will diminish the body’s oxygen-producing capabilities, resulting in a heightened risk.

There are also several things that will cause your body to use up the oxygen reserves quicker, including stress, being cold, or bad diving techniques that involve more exertion than necessary. Added to this is the practice of not allowing adequate rests between dives.

HOW CAN YOU AVOID SHALLOW WATER BLACKOUT?

Firstly, respect the water and your environment. Be aware that you are not invincible and that nobody is immune to this problem; professional swimmers, athletes, and even members of the Marine Corps have been affected.

Once you have grasped this, try to follow these basic rules: