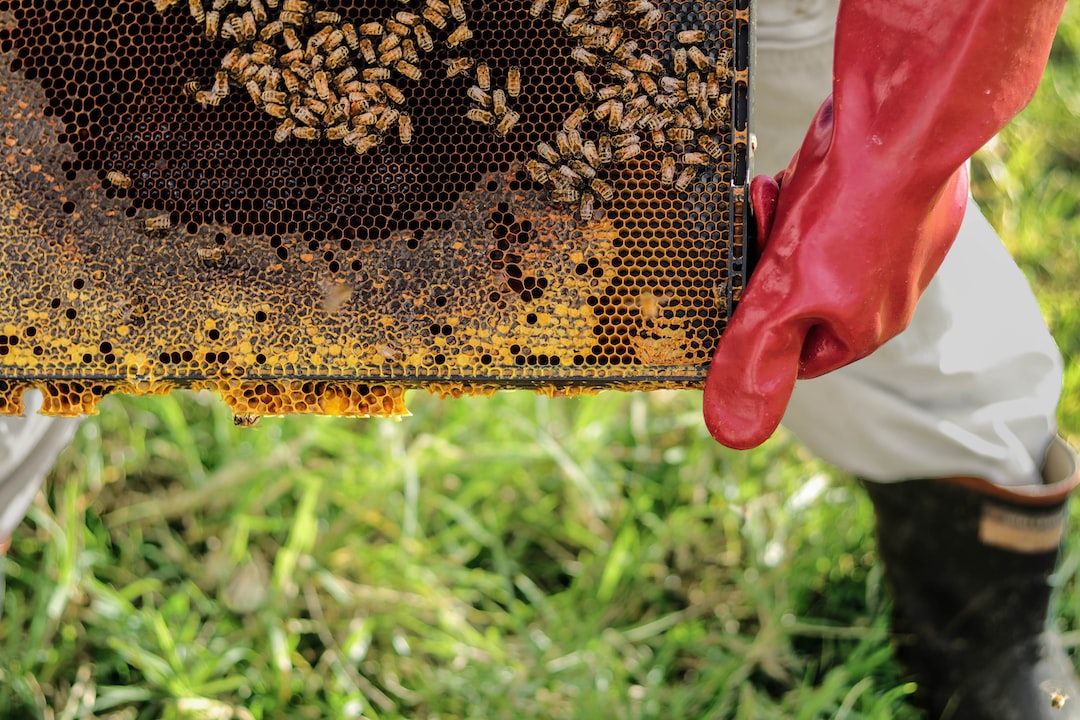 With the sun pushing through the thick haze of a July afternoon, Kara Brook stands in the middle of a large, lush farm field, dressed in white from head to toe. Donning yellow gloves, she slides the lid off a tall wooden box that stands beneath a patch of black locust trees. With a puff of smoke to abate the swarm, she slowly reaches inside and pulls out one long, thin frame, filled with a golden honeycomb.

From there, Brook will take that crystalline structure into her Kent Island garage, where it will spin in a centrifuge to extract its sweet stuff, which is then run through a sieve into a five-gallon bucket before being jarred, labeled, and stocked onto the shelves of her small store. When everything’s said and done, after 17 hives at some 30 frames apiece, she’ll have 40 gallons of pure, raw, Eastern Shore honey.

“It’s pretty incredible, isn’t it?” she says with a smile, as thousands of bees swirl around in the hot summer air that hangs as thick as molasses.

As the owner of Waxing Kara, Brook, 52, performs this harvesting ritual twice a year, but every Sunday, she’s out there in the field, donning that white beekeeper’s outfit, tending to her apiary. In its fifth year, her natural honey company has become a small-batch, Maryland-made favorite, sold at regional boutiques, spas, and groceries, as well as national brands such as Anthropologie and West Elm.

Inside her modern home, Brook admits this wasn’t the life she’d always imagined for herself. In fact, she stumbled into beekeeping through her original passion for art. As a graduate from the Maryland Institute College of Art in Baltimore, the retired artist was looking for an easy source for one of her mediums: wax.

“One day I said to my husband, ‘Honey, I’m going to get a beehive,’” says Brook matter-of-factly. “He said, ‘Do you know what you’re doing?’ And I said, ‘No—but I’ll figure it out.’” A couple months later, she started with two hives and before long realized that her hobby was actually a way of life, one oddly suited for the city girl. “There’s no way I could’ve predicted or designed this,” says Brook. “It’s almost like a door opened and I walked through.”

Now, she spends most of her time at Chesterhaven Beach Farm in Queen Anne’s County wearing a T-shirt, black wellies, and blue jeans. “Some girls ask for jewelry,” she says with a laugh as she steps over puddles and passes the John Deere tractor she just got for her birthday.

Out here, Brook can’t help but look across the verdant land and think about all the work that’s been done. In 2008, as a health-minded yogi and lifelong gardener, she made it her mission to transform 40 acres of agricultural farmland into a paradise of native species. With the help of a consulting ecologist, she replaced miles of monoculture corn and soybeans with fields full of clover and wildflowers, which bloom shades of white, gold, and purple if the timing is right. As she walks the paths, she gleefully points out the lavender, the buttercups, the honeysuckle that grows like weeds. There are also all the trees: the sugar maples, the tulip poplars, the black walnuts, and the old apple grove that still blossoms in the spring.

“We’ve tried to plant things that the bees love but that will also naturalize and perpetuate,” she says. “I’m not going to cut it back. It’s just going to do its own thing. Someday this place might be nothing but wildflowers.” For that, her honeys have a robust and floral flavor that bears little resemblance to the gooey gold of those little plastic bear bottles with a yellow cap.

She’ll also stop awhile to stare out over the wide and splendid Chesapeake Bay—which her farm abuts—where she regularly spies blue herons, bald eagles, and terrapins sunning themselves on the rocks. One might even say her honey has a hint of salt to it, thanks to those brackish waters. She dreams that one day the ancient loblolly pine forest that sits at the shoreline will be filled with endless hives from her runaway bees Sure, she’s had false starts and a number of learning curves along the way, but needless to say, the bees have become a full-time job—and even more so a labor of love. Maybe that’s why she’s reluctant to cook with her honey, knowing all the time and sweat that went into a single spoonful. But still, sometimes she can’t help herself. “I love it drizzled on Greek yogurt in the morning. I put it in tea. Sometimes I emulsify it with olive oil and herbs and rub it on a chicken,” she gushes. “After dinner, I drizzle it on peaches and throw them on the grill.”

For Eric Rescorla, one of Kara’s beekeeping volunteers who helped out with this season’s haul, the difference between local and storebought honey is like maple syrup and Aunt Jemima. “It’s so different,” he says. “It’s so nuanced. It tastes like it came from nature.”

For Brook, her honey is simply “pleasant,” and yet something that “you have to stand up and pay attention to.” This season’s harvest tastes of lavender and black locust, with a somewhat spicy finish that Kara can’t quite put her finger on. “I’m going to have to look into that,” she says. “We planted so many new things this year.”

The honey and the farm and its bees are constantly evolving, and Kara’s still making discoveries every day. “I love learning new things—even this late in life,” she jokes. “I’d like to keep doing this as long as I possibly can.” In her home studio above the garage, overlooking the mouth of the Chester River, Brook still uses beeswax to produce her paintings, and a canvas of colorful summer fruit sits half-finished in the afternoon light.