How To Teach Kids To Be Great Around Dogs 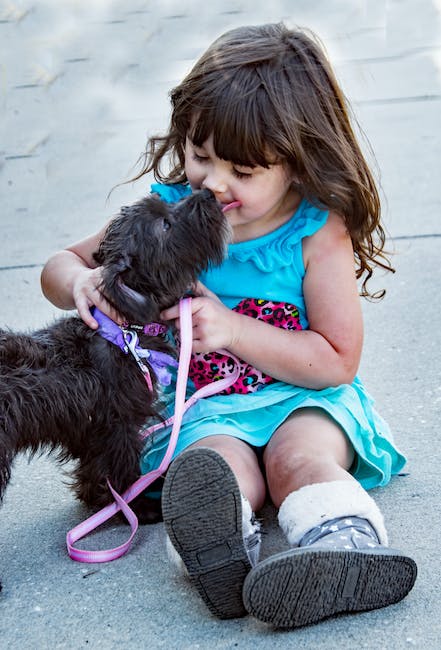 Originally Posted On: How To Teach Kids To Be Great Around Dogs – Mry C Pet Care

I have a border collie named Betty with strong herding instincts. I rescued Betty at a year old.  She is older now.  I also have five grandchildren ranging in age from newborn to seven years old who were terrified of dogs when I brought Betty for a visit a few months after I brought Betty home.  Since I love my grandchildren and my new dog, my mission is to teach the kids how to behave around dogs and teach them to behave around small children. Keeping everybody safe is always the top priority. I also wanted the kids and the dog to enjoy each other.

I cannot stress enough that none of the children have been left alone with the dog.  All have been closely supervised 100% of the time. Betty is an amiable and obedient dog.  Still, I would not leave her alone with children.

The first few visits, I put the dog in the backyard of my kid’s homes, and the grandkids could see the dog through the glass, and the dog could see them.  While they were watching the dog, we talked about the way the dog naturally behaves.  I told them the history of what the dog was bred to do.  We talked about sheep.  We talked about the dog’s natural desire to keep the sheep safe from getting lost or running away.  We took it very slowly, and I waited until the kids relaxed.  It took several visits before the kids wanted the dog in the same room.

In the meantime, I did a couple of things to desensitize the dog to small children’s movements.  We walked near parks and children playing.  We kept at a comfortable distance.  I rewarded Betty for not reacting to squealing running children, bicycles, runners, and other dogs.  Basically, we worked on behaving around distractions.  I am still working on distractions with Betty.   The other thing that I did was help the kids understand how to behave around dogs (be less distracting).  I told them to be calm around dogs.  Running makes the dog want to chase them and jump.  Squealing makes the dog want to bark. The kids learned to be calmer around Betty.

After several visits, the kids were ready to meet Betty face to face; the interactions were concise. If either the kids or Betty got nervous, Betty went outside or into her crate.  The crate was and is off-limits to the kids.  It is Betty’s safe place. Time went on, and the kids and Betty were less nervous around each other. Both are still always supervised when together.

Next, the older kids (5 and 7 years old) helped give Betty treats when we practiced obedience training. The younger grandchildren (2 and 3 years old) like to walk around with treat bags to hand out to the dogs now.  I had to hide the clickers because the littlest grand-kids were fascinated by the clicker sounds, and I didn’t want to desensitize the dog to the clicker.  It helped that my son got a dog that is very gentle around his three smaller kids.    When my daughter’s older kids wanted to practice training with Betty, I stood behind them at first to help Betty know that the kids should be obeyed.  I taught the kids the commands and hand signals for obedience training, and they loved learning how to get Betty to do tricks.  I taught the kids only to say the command word once and wait for her to obey.  Obedience training helped Betty understand that the older kids could tell her what to do also, and it calmed her even more around them.

The most recent thing that my two oldest granddaughters have been working on learning is loose-leash walking.  We practiced with Betty during Mother’s Day by attaching two leashes to her no-pull harness.  She is not completely trained to walk perfectly with a loose leash yet.  My 5-year-old granddaughter held one leash, and I held the other leash because Betty is strong and will still try to chase a cat or a squirrel if given the opportunity.  My seven-year-old grand-daughter held the leash to my mother’s eight-pound chihuahua.  I taught the girls how to hold the leash with both hands, keep the pups on the left side, and stop walking if the dogs pulled.  In a little over a year, we have gone from kids terrified at the sight of a dog to training and walking dogs.  The kids beam when they get Betty to beg or spin on command.

It is important to watch the kids and go at a pace that doesn’t make the kids or the dog uncomfortable.  Our progress has been determined by the curiosity of the kids and the comfort level of the dog.  If anybody involved seems nervous, we take a break. One of my grand-daughters that was especially fearful of dogs initially has become somewhat natural around dogs.  My mother’s chihuahua is often nervous around new people.  Little Audri, shown above at 5-years old, has a calm, easy nature that dogs find very comforting.  She’s the quiet one, and our dogs love her. We all do.  I am so glad to share my love of dogs with my grandchildren.