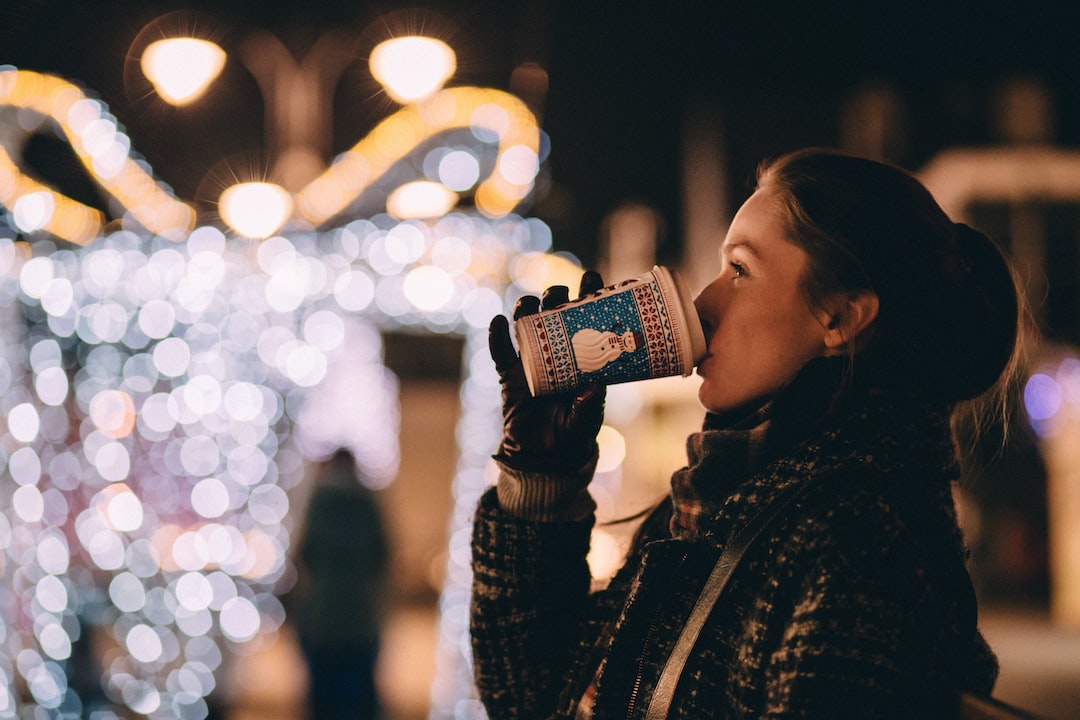 As the year wanes, the world celebrates – and in a variety of ways. From feasting and finery to gift-giving and holiday getaways, people around the world dig deep in a winter holiday shopping frenzy. See how holiday spending statistics stack up around the globe.

Countries with the Most Year-End Holiday Spending Spirit1

The end of the year brings about some major holidays around the world, including Christmas, Hanukkah and New Year’s. While year-end holiday shopping transcends cultures and is done in preparation for a variety of celebrations, three countries that take their shopping very seriously are the United Kingdom the United States, and Canada.

Here are the anticipated 2019 Christmas spending statistics for those shoppers:

U.K. holiday shoppers tend to start earlier compared to American shoppers, beginning their holiday spending in September and continuing through December. Data show that they concentrate their gift-giving on spouses, significant others, and their own children, spending an expected average of £1,049 ($1,360 USD).

While the most popular holiday gifts U.K. shoppers purchase are home goods, jewelry, and furniture, the majority will spend money on food and liquor this holiday season. Most U.K. holiday shoppers will shop on at least one of the major U.K. holiday shopping days (Black Friday, Cyber Monday and Boxing Day).

For most Americans, the winter holiday shopping season begins in November with preparations for Thanksgiving, Hanukkah, Christmas, and New Year’s. Gift-giving is primarily focused on significant others or children and will most often include gifts like electronics, furniture, or clothing.

Up to one-third of U.S. holiday shoppers will start shopping even earlier than November. But the biggest shopping days (online and offline) are Thanksgiving Day, Black Friday, and Cyber Monday. By New Year’s Eve, the average American holiday shopper is expected to spend almost $1,300!

Most holiday shoppers in Canada wait until December to shop and many will purchase clothing and apparel for gifts. Gift cards are a popular gift purchase as are food and liquor to celebrate the holidays. And while shopping online is popular, more than a third plan to do at least some of their holiday shopping in a physical store on the three most popular shopping days: Black Friday, Cyber Monday, and Boxing Day.

All told, it is estimated that Canadian holiday shoppers will each spend about $1,276 CAD ($964 USD).

People in the three countries known for the most holiday spending start their shopping marathons at different times:

How Holiday Spending Stacks Up Around the World2 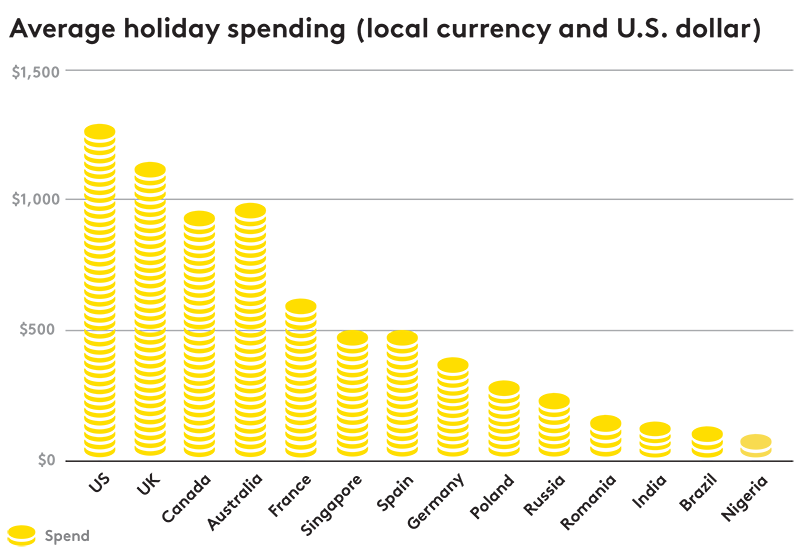 It’s the Most Wonderful (Spending) Time of the Year3

Plenty of money is spent around the world during year-end holidays. But what it’s spent on differs from country to country.

In India, the five-day Hindu festival of Diwali typically accounts for up to 40% of annual consumer spending in India, much of it on new clothes, jewelry and technology.

Chinese New Year is East Asia’s most important winter holiday, celebrated with major consumer spending on food, travel and gifts of money given in red envelopes.

Outdoor decorations are a must for almost all year-end holidays. In Manilla, Philippines, the annual Lantern Festival in December lights the night, but at a dazzling price. Each lantern costs more than $11,000 to build.

While turkey may be the centerpiece of a traditional U.S. holiday feast, in Japan, December 24 is celebrated with an unconventional repast: dinner from Kentucky Fried Chicken. A typical eight-piece dinner costs about $21.50.

Worth more than $2 million, the diamond-, pearl-, emerald- and sapphire-decked Christmas tree in the Abu Dhabi hotel in the UAE is the most expensive in the world.

While Black Friday and Cyber Monday are big shopping events in the U.S., Asia’s Double 12 ecommerce shopping event on December 12 is even larger. More than 322 million packages were sent as a result of the one-day sale event marketed in China, Hong Kong, India, Thailand and Philippines.

Online shopping rules – except in Holland. Dutch consumers value the holiday ambience and experience in the store three times more than consumers in other countries do.

Santa gets some big help delivering packages every year. On a single night during the holiday season, FedEx’s Memphis hub processes about 2 million packages in transit for delivery around the world.

For many, year-end holidays mean traveling to see friends or family or to enjoy a vacation. Between December 21 and 25, 69 million people pass through the world’s busiest airports.

What’s snowballing in popularity in holiday shopping? Mobile commerce. More people than ever are using their phones to research gift-buying options, compare prices, and make purchases on the go. Similar to the Western Union® app that makes transferring funds safe and easy, mobile shopping is delivering consumers a secure and convenient purchasing experience.

While shopping is a top year-end activity around the world, charitable giving is too. From volunteering to sending money, world citizens step up to meet needs.

The World’s Most Generous Countries

Percentage of the population who report volunteering their time and donating money to charitable causes. 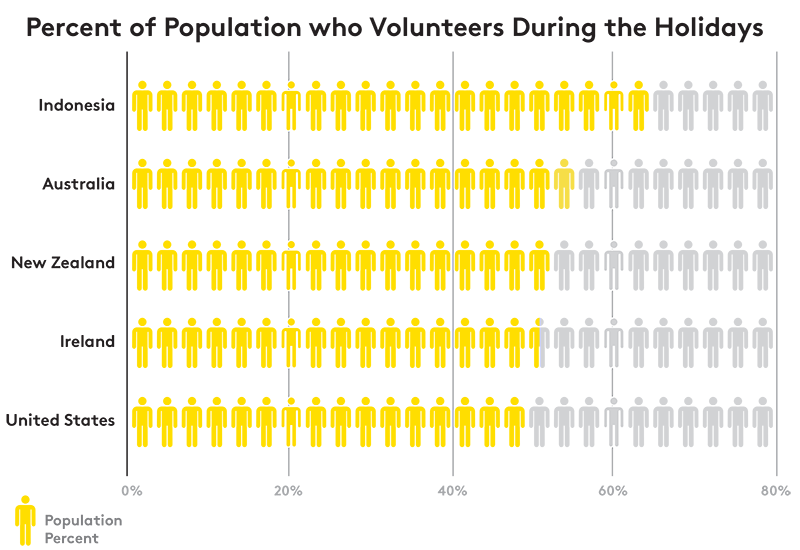 Data shows that the gift people prefer most during the holidays is money. Luckily, the power to send money around the world quickly and conveniently this holiday season is yours. Simply download the Western Union multi-language app and you’re good to transfer funds on the go. You can use a credit or debit card, transfer money directly from your bank account, or via Apple Pay.

So, go ahead, send your relatives cash to deck their halls in Dusseldorf. Transfer money to treat your friends Down Under to Christmas dinner. Or support that worthy cause on the other side of the world. With the Western Union® app, taking care of your favorite people this holiday season is a snap.

From all of us at Western Union, we hope you and yours have a wonderful holiday season.