A Brief History of Robotics 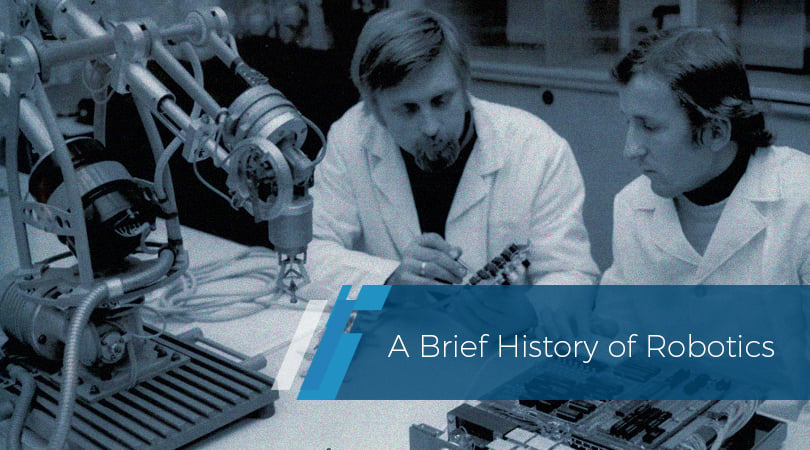 In regards to robots and society, there is a clear divergence between the associations people conjure up and the reality of the situation. Kubrick did a real number on the American conscience with his sentient antagonist HAL – and following the wake of Asimov’s novels and C-list sci-fi movies, a clear and haunting picture was painted of the impact robots would have on society. In reality, we are currently in an age of robotic innovations and the consequences are far less dire. In fact, humanity is all the better for it. The positive social, economic, and environmental impact made by robotics cannot be overstated.

A robot is quite simply a machine, having some level of autonomy, that relies on sensor(s) and computations to make decisions. Broad, maybe a little underwhelming, but considering the process, a robot demonstrates through its sensors sending data to its control system to determine an action this is nothing short of extraordinary. From their inception as divisive factory tools to modern-day phenomenons, we want to briefly encapsulate the storied history of robotics.

The cornerstone of robotics lies in the “dull, dirty, and dangerous.” All of which, in some way describe work done in factories. The 1950s saw the dawn of modern robotics when engineer George Devel’s patent for a mechanical arm evolved into the Unimate, now known as the world’s first industrial robot. Capitalizing on the repetitive nature of work on assembly lines, this arm was programmed to stack and weld metal sheets. Within two years of introducing the Unimate to expedite work along assembly lines over 450 Unimate robot arms were installed and utilized in factories.

While a game-changer for factory lines, there remained several opportunities for design improvement, especially in regards to programming. The next major step was taken in the mid-’70s with the IRB-6. Boasting microcomputer-controls and 16kB of memory, the IRB-6 set new standards on what was possible with robotic programming and application. However, despite innovations in programming, engineers were limited in the tasks they could program given the inability for robots to accurately gauge their surroundings.

As robots evolved in sophistication, it seems inevitable that engineers would want robots to mirror human traits such as sensing and reasoning. While research in AI had seen breakthroughs since the mid-’50s, practical applications didn’t come about until much later. The arrival of sensors is hard to accurately peg, given the flurry of patents filed throughout the ’70s, but the sensing capability they provided robots helped usher in a new era of robotic design.

By the late ’70s, the sophistication of algorithms enabled robots to recognize shapes, objects, and even subtle visual cues such as shading and patterns. Once again redefining the way factory work was accomplished, engineers leveraged the ability of robots to identify objects, and General Motors was quick to adopt this solution, the robotic system Consight. Using advanced sensor technology, Consight identified and sorted up to six different objects on a conveyor belt that held as many as 1,400 parts per hour.

Modern Era – Transition to the “Unstructured”

The 21st century has seen innovations on every front of robotic development, evolving in mobility, strength, and processing capability, to name a few. The most notable impact of the spread of robotics and unmanned systems today is in the ability of these systems to augment human effort outside the factory, in the “unstructured” real world. Robots are ubiquitous not only in research labs and assembly lines, but in hospitals, homes, the military, and on the road. Anticipating the divergence from its military and industrial roots, and the drift towards enterprise customers, Tomahawk Robots developed Kinesis, the world’s first robotic IoT control system for enterprise customers. Unifying multiple robotic systems via an intuitive controller and interface, Kinesis is a testament to the steps taken in robotic innovations and is critical to the continued expansion of robotics and unmanned systems in our daily lives. Visit tomahawkrobotics.com/kinesis/ to learn more about solutions this platform offers.