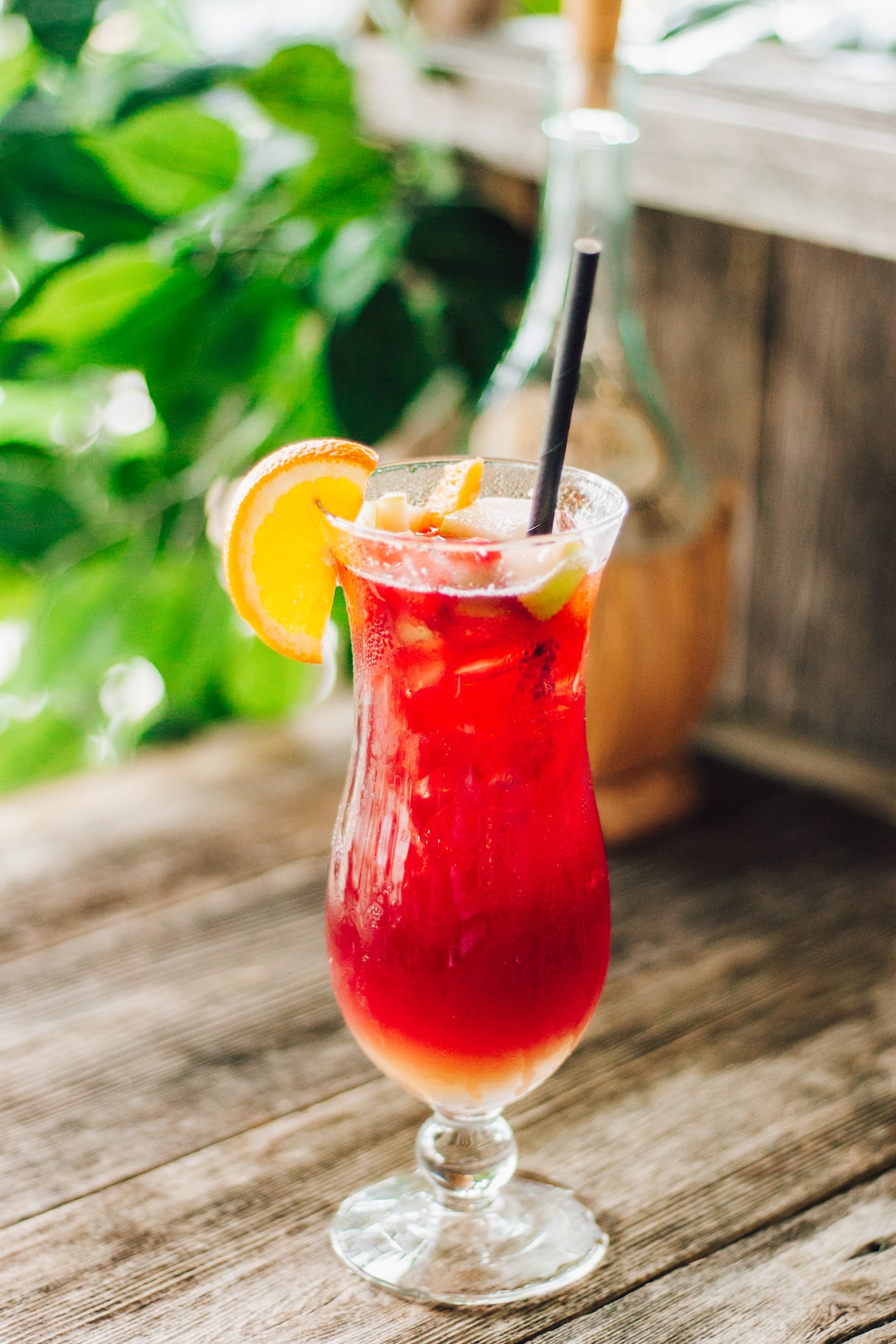 In celebration of National Rum Day on August 16th, we’re going to explore some aspects of tiki drinks since rum is the most common spirit used. We’ll take a look at the origin of tiki drinks, help you get your bar set up to make drinks and then share 14 of our favorite tiki drink recipes.

Let’s start with the basics. The word “tiki” comes from Polynesian and Hawaiian cultures, and it means a carved image that represents a god or ancestor. Tiki masks have different meanings depending on what they represent and where they’re placed, so a mask might ward off evil spirits or bring good luck. A tiki face is often on a tiki cocktail glass.

What’s a tiki drink? Tiki drinks are island-inspired cocktails that are usually made with rum. They’re usually fruity and colorful, and they come in fun glasses with beautiful garnishes like pineapple and maraschino cherries.

There are two entrepreneurs who are credited with introducing tiki cocktails to the US. In 1933, Don the Beachcomber (Donn Beach) opened the first tiki bar, called Don the Beachcomber, in Hollywood. Inspired by his travels in the South Pacific, Donn decorated the bar with things he saw in his travels, like bamboo bars and palm trees, and he served up tiki cocktails. Hollywood stars descended on the bar, and a trend was born. Victor Bergeron (Trader Vic) emerged as Donn’s competitor, feeding off what Don started and opening Trader Vic’s bar in the 1940s. Between the two, multiple tiki drinks were born and flourished for three decades, until the trend began to wane.

Although tiki bars aren’t quite as popular as they used to be, tiki drinks are still enjoyed around the country. It’s a chance to dream about being on a beach without having to travel.

Stock Your Bar for Tiki Cocktails

Tiki drinks can sometimes require quite a few ingredients, and some have ingredients that may not be very common. Have you heard of Pernod (an anise-flavored liquor from France)? How about Falernum (an 11% ABV syrup liqueur or a nonalcoholic syrup from the Caribbean that has flavors of ginger, lime and almond)? These two ingredients are found in the original Zombie cocktail recipe from Donn Beach. But don’t let the unknown scare you—you can use substitutes (anise-flavored liqueurs, such as absinthe or Pastis) or make your own. You can impress your friends with your knowledge of tiki cocktail ingredients.

That being said, many tiki drinks have ingredients in common. To start, tiki drinks generally have rum in them, so you can get started making drinks with either light or dark rum. To create your own tiki drink selection at your restaurant or home bar, we recommend stocking your bar with the following basic ingredients.

Let’s dive into our top 14 tiki drink recipes. Note that over time, many of these recipes have changed. And many of the recipes use barware in the form of a mixing glass, cocktail strainer and spoon.

The Beachcomber is a fun and simple drink. Picture yourself with a group of friends in the evening watching the setting sun and sipping on this maraschino cherry-flavored cocktail. It’s one of the few tiki drinks that’s served in a martini glass for a bit of elegance.

Fun trivia: Though you’d think this drink would’ve been created at Don the Beachcomber, it was published in “Trader Vic’s Bartender’s Guide” (1947). So who created it? Hmmm…?

The Mai Tai is one of the most famous tiki drinks, consisting of dark and light rum plus an orange liqueur and fresh lime juice. It also contains orgeat syrup, an almond floral syrup. You can make orgeat syrup or buy it in some liquor stores and supermarkets. You can also substitute amaretto. For the real thing though, use true orgeat syrup.

Fun trivia: Legend has it that the first person to try the cocktail yelled out, “Mai Tai!” which means “the best—out of this world” in Tahitian.

The Painkiller is a good mix of rum, fruit juices and coconut cream. It can be thought of as a “hair of the dog” drink, but we’ll leave that up to you to decide.

Fun trivia: The Painkiller was created at the Soggy Dollar Bar in the British Virgin Islands in the 1970s. The bar got its name because with no dock, patrons had to swim ashore, getting their money and belongings wet.

Donn Beach invented the original Zombie cocktail in 1934. Although this recipe has changed over time, we wanted to provide the original recipe. The recipe includes the ingredients falernum and Pernod that we mentioned previously[JW4] , but again, no worries—you can use substitutes.

Fun trivia: Since the original Zombie drink was created in 1934, several iterations have been born. Here’s an updated version by Donn from 1964 called the Aku Aku Zombie.

The Navy Grog originated in the mid-1700s as a drink for British sailors to preserve the water that they stored on the ship and to get extra vitamins to fight diseases such as scurvy. It was typically made with hot or cold water (or rum), lemon, honey and cinnamon.

Fun trivia: Like other drinks during the prime tiki drink era, Donn and Vic both had different versions, although it was said that Donn created his first. Which do you prefer? View both recipes.

We’re going to depart from rum for a minute to focus on another classic drink, the Singapore Sling. This drink originated in 1915 at Raffles Hotel in 1915 by bartender Ngiam Tong Boom. It’s made of gin and several fruit juices and liquors. The term “sling” comes from a North American drink made of spirit and water that’s sweetened and flavored. The Singapore Sling was created to attract ladies with its pink color.

Fun trivia: As with many other drinks, the Singapore Sling recipe has changed over time. In fact, the Raffles hotel today serves two versions: one with a premixed batch that tastes like fruit punch and another with fresh juices that’s shaken by hand.

A Rum Runner is a classic cocktail that screams island and beach vibes. Recipes can vary, but in general, a rum runner has rum, fruit liqueurs and tropical juices. They’re a perfect cocktail for enjoying a summer BBQ or imagining being on a beach in the middle of winter.

Fun trivia: The Rum Runner is named after bootleggers who smuggled in rum and other alcohol during Prohibition and then to avoid taxes. It was created in the 1950s at the Holiday Isle Tiki Bar in Islamorada, Florida.

Does this drink not evoke thoughts of the ocean waves lapping against a beach? It’s such a fun, visual drink to enjoy, especially during the summertime.

Fun trivia: The Blue Hawaiian was created in 1957 by Harry Yee, the former head bartender at the Hilton Hawaiian Village in Waikiki, Hawaii. The Dutch distiller Bols asked Yee to craft a drink using their Curaçao liqueur.

This refreshing drink came from Cuba. Although the origins of the drink can be debated, the recipe was first published in the 1930s. The key to this drink is muddling the mint. Paired with rum, lime, sugar and club soda, it’s a lighter cocktail.

Fun trivia: Ernest Hemingway apparently called the mojito one of his favorite drinks. He made the bar Bodega La Complaciente in Cuba quite famous for frequenting the place and expressing his enjoyment of the drink.

The Hurricane, a potent mix of fruit juices and rum, was invented in the early 1940s at Pat O’Brien’s in New Orleans.

Fun trivia: In the 1940s, there was a surplus of rum as it was easier to acquire than other spirits, so the bar started experimenting with rum drinks, and the Hurricane was born.

We can’t write about tiki drinks without mentioning the piña colada. This tiki drink was created in 1952 by Ramon Marreto Perez from the Caribe Hilton in Old San Juan, Puerto Rico. It’s now a staple for vacationers to enjoy at hotels and restaurants.

The Swimming Pool – doesn’t the name just sound like a fun party drink? It’s similar to the Blue Hawaiian and Piña Colada but with a twist. With Blue Curaçao to give it the pool look, it also has white rum, vodka, cream of coconut, pineapple juice and more.

Fun trivia: The inventor of the Swimming Pool, Charles Schumann, was a renowned bartender in Munich, Germany and opened Schumann’s American bar in 1982. Of course, we can’t talk about rum and tiki drinks without mentioning a shot. Tropic Thunder is a well-known shot with 3 (or 4) simple ingredients. This shot will transport you to somewhere warm and tropical.

And now, here’s a drink recipe from Crew Supply’s own Kyle McElfresh, a former seasoned bartender who worked in the heart of New Orleans, and is now our Brand Director. This riff on the Queen’s Park Swizzle incorporates Peychaud’s bitters as a homage to Kyle’s days tending bar in New Orleans.

Add ingredients to a chilled collins glass. Fill to ¾ capacity with pebble ice. Churn vigorously with a swizzle stick. Pack ice (by hand) to the brim of the glass, creating a snow-cone-like effect.  Garnish with Peychaud’s bitters and a mint sprig bundle.

We hope you’ve enjoyed our tiki recipe blog post! We certainly had fun putting it together. To learn more about our barware, check out our website or email us at [email protected] Happy National Rum Day!